The year is 2010. I sit in the Antaeus office, likely working through academy auditions or casting for an upcoming reading. Downstairs in the library, sounds of hope and peer encouragement mingle with the Salesforce training. I can hear a tangible optimism, a desire for all those development, general manager, box office folks to jump right into a new software and finally organize those years of Excel lists or poorly photocopied box office reports.

I sit in numerous staff meetings and hear our development associate and office manager essentially plead for someone, anyone, to use this new system. I hear them. I respect them. I understand their point.

I look at my calendar and simply wonder, “When?”

Later, I am leaving this theater to go freelance again. My main task before I go is to input all of my contacts and properly update them in PatronManager (an app built on top of Salesforce). I feel like Bilbo Baggins onstage at his birthday party:

I sit at my home office, because I cannot concentrate at the the theater. I have all my Excel sheets, all my poorly photocopied class lists, all the resumes submitted, in front of me. I pour a glass of wine and begin.

I end a full bottle and eight hours later. Once I started, I couldn't stop. It was so exciting to get everything in order, to categorize everyone I'd encountered over my time there, so there would be little institutional memory lost with me. All of my notes, thoughts, recommendations were right there in the database.

I kick myself for not doing this before the eve of my departure. It would have solved so many problems.

Three years later, I am part-time staff in a marketing role. I see again in meetings how many times the one administrator who is trained in PatronManager suggests that we, you know, use it. She points out how many of our challenges are actually addressed in the software. It isn't until she leaves, two years later, and someone from another, larger nonprofit, who used the database regularly, comes on board that I use it. He basically stops asking the staff to open the database and initiates all of his communication and organization from there.

Once again, I see how useful the database can be and open it regularly to track my contacts, questions and collaborative projects.

Why is it so hard to get paid staff of a nonprofit to use new software, never mind those companies that run with nearly all volunteers? I asked Mark Doerr of LA Stage Alliance to offer his thoughts, since LASA was in partnership with PatronManager from roughly October 2010 to August 2015.

The first question was, why did LASA introduce Salesforce to its members in the first place? Doerr answered: “Everyone needs to keep track of various data sets; ticketing, donations, emails, grants and they're spending so much time managing that data they don't have time to make use of it in meaningful ways. For example, when I started working with The Road they had: a contact dbatabase in FileMaker Pro, ticketing through OvationTix, a Constant Contact email database and were basically tracking their donations through Quickbooks. When a show closed it took the volunteer who was managing all this almost 2 months to get everything consolidated and cleaned up. When I heard about PatronManager I thought it would be great and led the transition. It was a challenge in many ways but it was extremely effective in making it easier to manage the operations of the company. Though I'm no longer over there, I understand The Road still leans on it heavily.”

Then we get into the question of why some theaters are able to use the software effectively and some are not. He broke it down into four reasons, which we will address in more detail in later articles:

So how many Los Angeles area theaters still use PatronManager regularly enough for it to be useful? LASA doesn't have an exact number or way to quantify its effectiveness across all organizations, but Doerr estimates that half of the 103 who signed on still use it, either for donations or ticket sales, though he admits even this guess is based on data that is over 18 months old.

“A few were still clients in name only...they had started selling tickets or taking donations elsewhere. I know that a few of the long time clients either have moved on, or will be soon, from the system. I also know that a few are larger houses, which is usually the type that gets the most out of a system like that.” (Again, he is only guessing based on older information, and I will get official numbers from Salesforce in a later article.)

So where does your organization stand? Do you or did you find Salesforce helpful at one point, but stopped using it? Was that for any of the reasons outlined above or others? Were/are you one of those staff members trained in the system but couldn't get the buy in? Or is Salesforce your miracle worker and you can't imagine your day to day without it?

Comment below, or email me to remain anonymous: cindymariejenkins@gmail.com 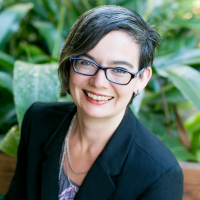 Cindy Marie Jenkins is a Storyteller and Outreach Nerd from Los Angeles. She's currently a Write-at- Home-Mom in Orlando for cool reasons that require multiple NDAs to explain. She reviews fairy and myth re-tellings and generally writes about being a book nerd at DwarfandGiant.com , a blog of The Last Bookstore. Her current project is a re-telling of Hamlet from Horatio's point-of- view and The Oresteia from Electra's. Cindy divides her personality into twitter accounts such as @CindyMarieJ, @FauryFolkMyth & @ParentingNerd. Find her other opinions at CindyMarieJenkins.com.