I watched this production when it first went up in February and I don't think any description prepared me for what unfurled on the stage. A dystopian world unfolds itself in front of the audience's eyes and it is quickly understood in the dynamics between the actors and their set. This play almost mimics contemporary choral pieces, combining together rhythms that normally don't match but flow seamlessly somehow through its message. The message itself is up for the audience to interpret and ponder upon, definitely questioning authority but also questioning our willingness to stick to what's deemed correct or what we morally feel is right. The vocal quality says it all as each character, a different number, has it's own volume and pitch, personalizing an objectively nameless character into someone understandable. The cast works very well together in this ensemble piece, always on the balls of their feet, ready for what comes next. The costumes unify it with it's urgency, no notice to the rips and tears but a utilitarian sense in the belts and easily moveable clothing. The effects are particularly intriguing with it's seeming repetition but slight difference in every cue, making you delve into the message even further. And all of this is under the umbrella of the director who brings her flexibility, intelligence, and creativity to the stage with this bare bones script brought to a new dimension. 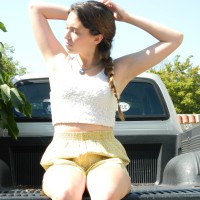